The Duke Blue Devils are off to the ACC semifinals after securing a 74-73 over UNC.

Zion Williamson’s return to the Duke Blue Devils’ lineup has been nothing short of awe-inspiring, his every whim cross-inspected by ball fans worried an injury could derail the promise of a storied NBA career.
View image on Twitter 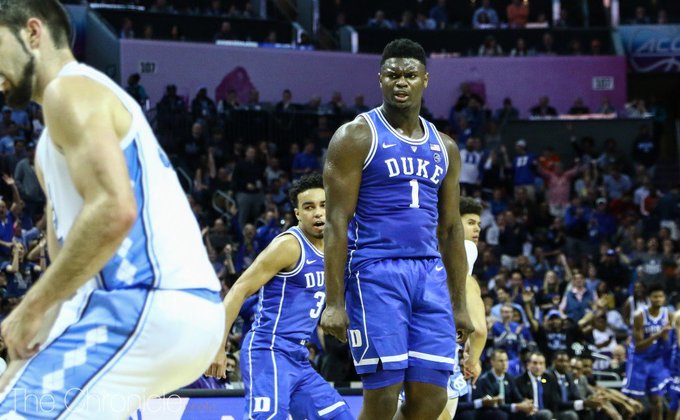 “Why would I pass up on this experience, playing in the biggest rivalry ever? You can’t go create moments like that nowhere else.” –Zion Williamson:https://chron.it/2FfUqW3

In true blue fashion, Zion Williamson never entertained the idea of an injury shutdown, instead focusing on riding out the NCAA Season with his teammates and a National Championship win.

That sentiment was readily apparent last night, as Zion poured in 31 points and the game-deciding bucket to help the Duke Blue Devils to a spot in the semifinals of the ACC Tournament. And to make matters all the sweeter, the Blue Devils clinched the W over their bitter rivals, the North Carolina Tar Heels.

“It was tough watching the first few games, watching my brothers out there battling. I wish I could go to war with them but it was really exciting to get out there and play,” Williamson told reporters after securing the narrow 74-73 victory. “The rivalry lived up to what I expected it to be and to make the game-winning shot, honestly I have to give credit to RJ because the read was for him to fake the ball and take it to the basket. But he read the defense and gave me the ball and my teammates trust me to make the shot.”