VERY SAD: Man quits his relationship one month after he publicly announced that he got a “yes” from her.

Twitter to reveal he got a “yes” from his crush as she agreed to date him, has returned to the platform to reveal his relationship is over.


On the 11th of Augus, the young man announced: “She finally said yes!!! No more single gang guys. everyone, meet my baby, Amaka.”

However, just 46 day from that joyful day, he gave an update that read: “E don spoil. Ended in tears. We move! Onto the next”. 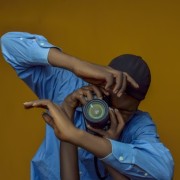