Two-month-old baby pulled alone from rubble as family got killed in Gaza airstrike.

A two-month old baby was the only survivor as ten members of one Palestinian family were among at least a dozen people killed by renewed Israeli air strikes on the besieged Palestinian enclave early on Saturday, with Hamas militants responding with rocket fire into Israel for a fifth night.

The infant boy was reportedly pulled from the rubble of a four-storey building in Al-Shati refugee camp in Western Gaza, one of the most densely populated areas of the built up coastal strip. Residents said the building was hit by an Israeli air strike without warning, killing at least 10 members of the Abu Hutub family, with more people still reported missing . 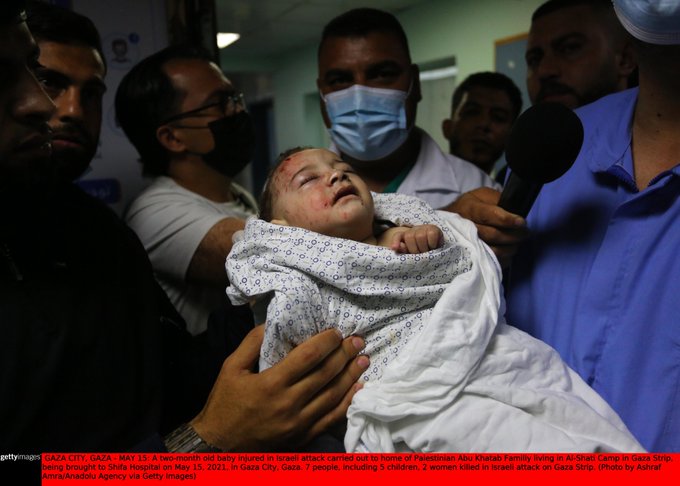 The strike was the deadliest since Israel’s battle with Gaza’s militant Hamas rulers erupted earlier this week.

The Israeli military said it carried out strikes on a Hamas military intelligence facility and a number of rocket launching sites in northern Gaza.

At least 132 people have been killed in Gaza since Monday, including 32 children and 21 women, Palestinian medical officials said.

Gazans say whole families have been wiped out in the intense Israeli bombardment, despite Israeli military statements that it seeks to avoid killing civilians.

One video shared online shows the moment Gazan civil defence worker Hassan Al-Attar arrived at a morgue to identify the body of his daughter Lamya and her three children Islam, 8, Amira, 6, and Mohammed, 10 months.

Mr Al-Attar remained calm as he bent over the body of his 28-year-old daughter and her children, which were stacked two abreast on metal trolleys in a refrigerator. His comrades stood behind him stoically in orange vests, urging him to pray for her.

The four were killed by Israeli strikes on Beit Lahia, according to Ali Hawas, media director for Gaza civil defence, after the northern town was subjected to a bombardment that the Israeli military said was aimed at destroying a tunnel network.

Some 950 Palestinians have also been injured in the fighting, resulting in bedlam at Gaza’s overstretched medical facilities.

Slumped against a wall a young man was comforted by crying relatives as he screamed out for his father. “Oh God, where is my Dad,” he sobbed repeatedly.

The Israeli offensive has violently disrupted the Palestinian enclave’s coronavirus response, according to Dr Asraf Al-Qedra, a spokesman for Gaza’s Health Ministry.

“If this aggression continues this might lead to a complete shutdown of the coronavirus health care system,” he said, describing how covid patients were being treated at home.

Several medical facilities in the enclave have been damaged by air strikes, he said, including the Indonesian Hospital in Beit Lahia, a quarantine centre in Rafah, and a clinic in northern Gaza which was totally destroyed.

Medicines, medical supplies and blood banks are running low, he said, adding that Israeli authorities have blocked crossings into Gaza, preventing the importation of life-saving equipment.