Tomi is still attacking the Obamas.

Donald Trump is on Twitter every day going off about one topic or another. There really is no need for people to try to interpret his words or defend him, because he enjoys sharing lengthy rants that lays everything out in the open. Still, Tomi Lahren has made it her life duty to comes to Trump’s defense at any moment. Former First Lady Michelle Obama was on a London stop of her Becoming book tour, and The Independent claims that she compared Trump’s White House to living with a divorced father. Tomi didn’t like that at all.

“We come from a broken family,” Obama said. “We are a teenager where, you know, we’re a little unsettled, you know, and having good parents, you know, is tough. Sometimes you spend weekends with divorced dad and that feels like it’s fun but then you get sick. That’s what America is going through. We’re kind of living with divorced dad, right?” Fox & Friends co-host Brian Kilmeade showed a clip of Mrs. Obama’s comments before passing things off to Lahren.

“Well, I think Michelle Obama is becoming incredibly tasteless, and to use that kind of language to attack the president, I’m not very shocked or surprised by it,” began Lahren. “I will say this: Can you imagine if a conservative would compare anyone to [a] single mom in a derogatory fashion? There would be outrage, there would be backlash, it would be all over social media. But because Michelle Obama is Michelle Obama, she’s a Democrat and she has the last name of Obama, she can get away with it.” The internet was quick to defy Lahren, who seemingly forgot that Trump is a divorced dad. He has been divorced twice, and married his mistress who is now our First Lady. Twitter made sure to remind Lahren of this fact.

Isn’t he a twice divorced dad?
Seems pretty accurate to me.

I can see how accuracy would be a source of outrage for you though. It’s probably a dirty word in your line of work… Right?

St. Paul and the Boiled Scones@pdkcooks

Not to hop on the train but the man has been divorced twice and has children from both of those marriages. He is by definition a divorced dad.

See St. Paul and the Boiled Scones’s other Tweets

Y’all keep saying “imagine if Trump said something like that!” but he DOES say much worse than that–often more than once a day. We don’t have to imagine it.

“Can you imagine if a conservative would compare anyone to a single mom in a derogatory fashion? There would be outrage … but because she has the last name of Obama she can get away with it.” 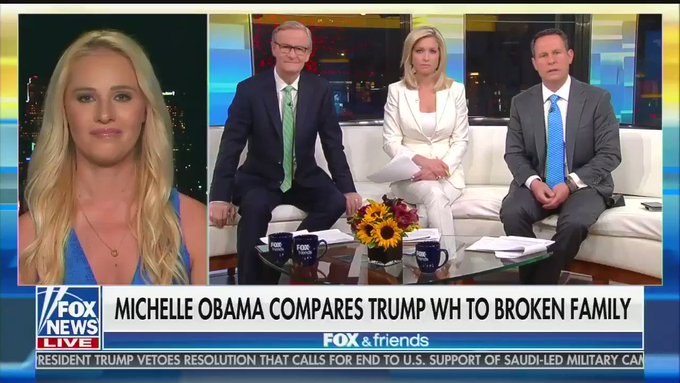 Let’s see, trump has been divorced 2 times, married his mistress from his second marriage, our First Lady. He admitted he was never around for his kids as they were growing up. He literally was a divorced dad.

@TomiLahren you should be thanking @MichelleObama @BarackObama because of them you have health care! You confused

little individual! P.S. trump has been divorced twice, married his mistress, that has posed nude! So who’s tasteless!

Except that Donald Trump IS a twice divorced dad and Michelle Obama has never been a single mom. But other than that, your outrage makes total sense