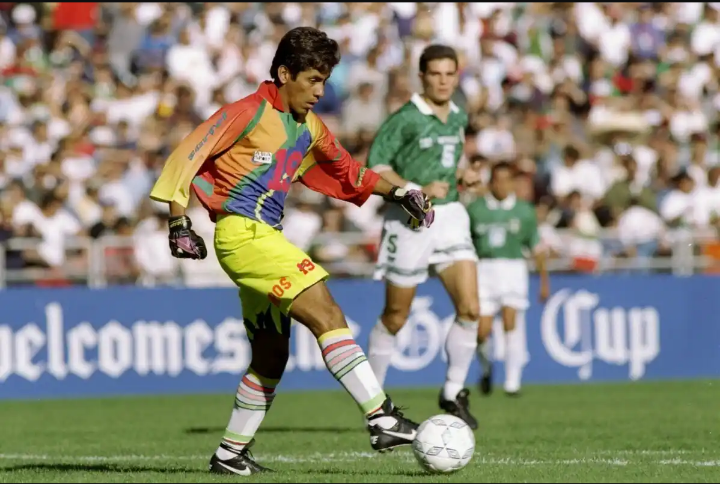 Why are we naturally drawn towards football’s mavericks?

There’s something wonderfully captivating about players who break out of the confines of their role to entertain us in a manner not served up by your run-of-the-mill professional.

It’s why the likes of Juninho Paulista, Georgi Kinkladze and Matt Le Tissier will be remembered long after football’s more reliable – but less scintillating – performers are forgotten.

Goalscoring goalkeepers are arguably the biggest mavericks of all. There’s nothing more unorthodox than a keeper flipping the game on its head by daring to score goals rather than just protecting his own net.

Perhaps that’s what makes them so endlessly fascinating – they are the game’s ultimate rebels, free-thinkers who refuse to conform or comply with football’s norms.

The king of goalscoring keepers, Rogério Ceni racked up an incredible 131 goals in a career that spanned 25 seasons. A São Paulo icon who made all but 20 of his 1,258 appearances for the Brazilian side, Ceni reached the peak of his scoring powers when he netted 21 times in the 2005 season.

While plenty of custodians only find the net by scoring penalties, the man from Pato Branco was deadly from free kicks too – scoring a staggering 59 in all competitions.

He wasn’t bad when it came to regular goalkeeping duties either. Sixteen caps for Brazil, a World Cup winner’s medal and two Copa Libertadores trophies reflect an impressive career that is often overshadowed by Ceni’s contributions at the other end of the pitch.

When a goalkeeper is nicknamed El Loco you know they’re going to be something of a wildcard. René Higuita certainly lived up to that reputation, gaining widespread fame for his ‘scorpion kick’ save against England back in 1995.

Higuita wasn’t as prolific as Ceni in the goalscoring stakes, but the Colombian did still chip in with 41 league goals and a trio of strikes in international matches.

Imprisoned for his involvement in a kidnapping and testing positive for cocaine, Higuita’s talent as a goalkeeper has perhaps been somewhat forgotten amidst his madcap antics. But the 5ft 9in stopper was a pioneering sweeper-keeper who would have been a perfect fit in the modern game.

If Higuita was small for a goalkeeper then 5ft 6in Jorge Campos was unfathomably tiny. But what he lacked in stature he made up for in flair – the 130-cap Mexican international used to design his own kits, coming up with a host of obscenely bright and colourful strips.

Another ball-playing keeper who was happy to get involved with play outside of his penalty box, Campos scored the vast majority of his goals early on in his career while playing in his homeland for Club Universidad Nacional.

There’s a reason why that was his most prolific period – he played up front for one season in 1989/90, hitting the back of the net 22 times during that campaign.

When you think of free-kick taking goalkeepers, José Luis Chilavert is usually the first name that pops into your head. El Buldog is one of football’s feistier characters, but developed a reputation for set piece goals that is perhaps even more famous than his forceful personality.

The Paraguayan’s striking instincts were somewhat curbed while playing in Europe for Real Zaragoza and Strasbourg, but he was let off the leash when taking to the field for his national team.

Chilavert scored eight international goals – a goalkeeping record – and even netted a hat-trick while representing Vélez Sarsfield in Argentina. Ceni is the only player on this list to top his impressive career total of 67 goals in all competitions.

Latin America is the epicentre for free-scoring keepers, but a handful of European candidates have an impressive reputation for goalscoring. German keeper Hans-Jörg Butt has arguably scored at the highest level with 26 Bundesliga strikes and three in the Champions League, while English football fans will be familiar with Peter Schmeichel’s finishing ability – his volley for Aston Villa against Everton in 2001 was the first by a goalkeeper in Premier League history.

But for pure penalty-taking composure, few can top Bulgaria’s Dimitar Ivankov. The former Levski Sofia legend sits third in the all-time goalkeeper scoring charts after registering 42 goals in a 15-year career largely spent in his native country and with Turkish clubs Kayserispor and Bursaspor.

After 478 league appearances Ivankov has recently been working as a goalkeeping coach at Levski Sofia. Let’s hope he’s teaching the next generation how to take spot kicks, as well as save them.

I Helped Her Financially In School,Now I Want To Marry Her She's Saying This - Ebonyi Man Cries Out In Pain

After Bournemouth Trashed Leicester City 4-1, This Is How The English Premier League Table Looks

Abraham Cries In Dressing Room, After Being Called A Championship Striker By Lampard