For a while, R&B fans criticized the genre because it seemed as if there was a lack of solid artists. Yet, it looks as if a new generation of singers and songwriters are breathing new life into R&B, and the ladies of SWV have sat down to share their opinions on who’s got the chops and who doesn’t. Cheryl “Coko” Gamble, Tamara “Taj” Johnson and Leanne “Lelee” Lyons caught up with Cocoa Butter and watched a series of music videos from today’s rising, and established, stars. While comments were overall positive, viewers noted that Coko’s face said more than her words did.

First up was the collaboration between H.E.R. and Bryson Tiller. Lelee smiled as she said, “I live for H.E.R.,” and Coko interjected, “I don’t live for H.E.R., but I love H.E.R.” When Taj said she loves that H.E.R. “does R&B,” Coko added that she just wished she would do something a little different. Next, they were played Jhené Aiko’s jam “Sativa” featuring Rae Sremmurd.

Taj stated, “This is not my go-to song, but I like little things in it.” Before she could finish, Coko said, “I just feel like, if you’re depressed, you shouldn’t listen to it.” She then made a motion like she was nodding off as the other ladies chuckled with laughter. That was followed up with Chloe x Halle’s track “Happy Without Me” featuring Joey Basda$$. Lelee asked, “Do you guys think they sound a lot like Beyoncé?” Her bandmates agreed.

Taj said she loves the sisters as actresses on Grownish and she adores them when they sing live, but she has yet to come across a song of theirs that “pops” for her. Coko just shook her head while giving a slight snarl before saying, “I feel like I’m lost.” Things quickly turned to Kehlani single “CRZY,” and all the ladies loved that one.

When it came to Teyana Taylor’s “Gonna Love Me” with Ghostface Killah, Method Man, and Raekwon got screams of praises from the R&B icons. “I actually love Teyana,” Coko said. Lelee added, “She’s gonna be around for a minute.” Queen Naija was met with mixed reviews. Lelee sang her praises and Taj complimented the young star as well, but throughout the segment, Coko’s face showed viewers she wasn’t feeling it. 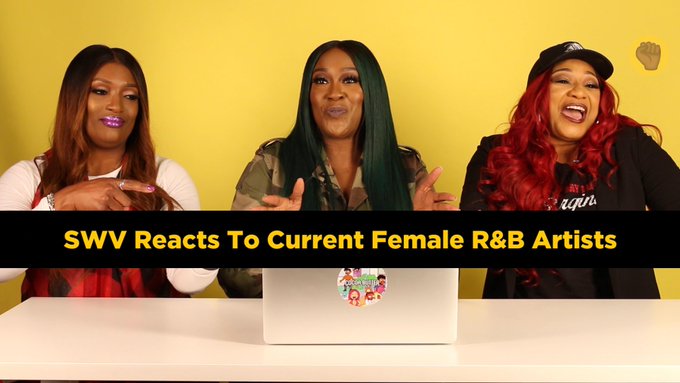