Suspect Wanted For Nipsey Hussle’s Murder: Nipsey Hussle was shot in front of his The Marathon Clothingstore over the weekend and now police have a suspect for his murder.

The LAPD took to social media today asking the public for help in finding Eric Holder. He is wanted for the shooting and killing of Nipsey Hussle and injuring two others on Sunday. Eric is believed to be known to the Crenshaw artist. This is why authorities think he got so close before opening fire. The 29-year-old suspect and aspiring rapper is an alleged gang member, however the incident is being taken as a personal attack. Holder was last spotted leaving the crime scene in a white 2016 four door Chevrolet Cruz. He entered the car from the passenger side while an unidentified female drove.

Hussle tweeted this just hours before the shooting:

Having strong enemies is a blessing.

191K people are talking about this

Police answered to another emergency at the Slauson Avenue location yesterday. Nipsey Hussle’s vigil became overcrowded causing a stampede. Several individuals were injured during the frenzy.

The Victory Lap rapper was scheduled to meet with LAPD yesterday to discuss solutions for gang violence in the area. Snoop Dogg, The Game, Kendrick Lamar, and other Los Angeles figures have also been working on community issues for years. Kendrick recently held a moment of silence for his fallen comrade in Argentina.

Check back for more information as it becomes available. R.I.P. Nipsey Hussle.

UPDATE: The suspect has been caught. 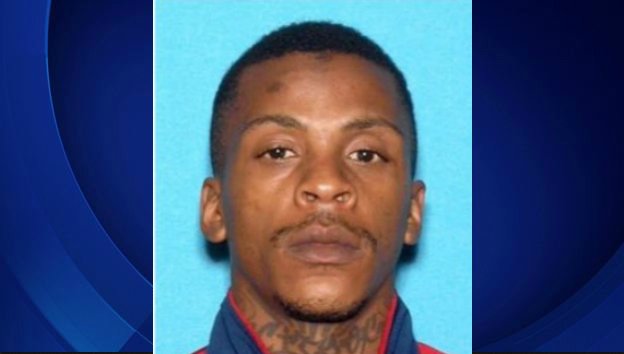 #BREAKING: The suspect in the shooting death of musician Nipsey Hussle has been captured in Bellflower, authorities say. 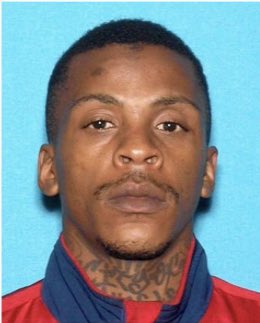 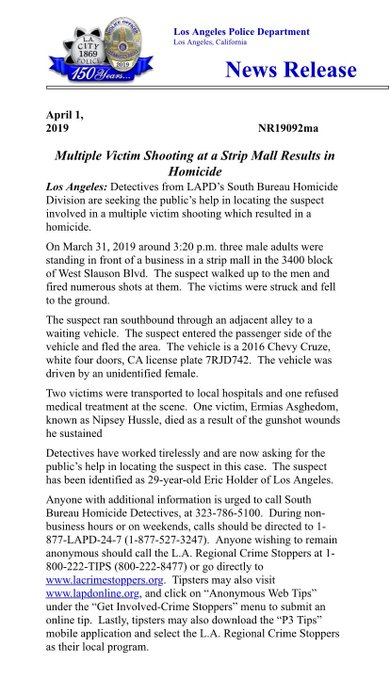 Eric Holder is wanted for Homicide in the shooting of Nipsey Hussle. He was last seen in a 2016 white 4 door Chevy Cruze CA license plate 7RJD742. Anyone with information related to his whereabouts or this deadly shooting is urged to contact South Bureau Homicide at 323-786-5100

Our men and women are on scene and making every effort to protect everyone in attendance at the Nipsey Hussle vigil.

Reports of shots fired at the vigil do not appear to be accurate. We do have injured in the chaos and are attempting to restore order.

We understand the community is mourning and we feel your loss.

We are asking for everyone to follow the officers directions and disperse from the immediate area.