It ain’t easy being Queen.

Nicki Minaj’s European tour is starting to feel like somewhat of a misadventure. That’s not to slight the legendary rapper, who has forged her way through an impressive and record-breaking career. Yet the cruel sisters of Fate appear to be stacked against her, as unforeseen problems have led to yet another concert cancellation. While the first two, in Bratislava, Slovakia and Bordeaux, France respectively, had to be canceled due to electrical issues, her scheduled show in Dublin, Ireland was called off due to weather issues.
View image on Twitter 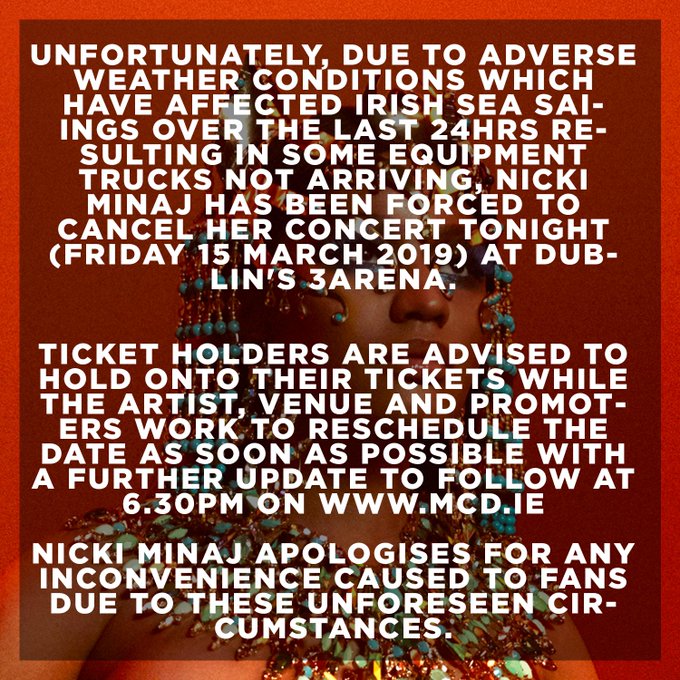 [ NICKI MINAJ CONCERT UPDATE ]
Due to adverse weather conditions which have affected Irish Sea saiings over the last 24hrs resulting in some equipment trucks not arriving, Nicki Minaj has been forced to cancel her concert tonight (Friday 15 March 2019) at Dublin’s 3Arena.

Promoters broke the news on Twitter, laying the blame at the feet of the elements: “Due to adverse weather conditions which have affected Irish Sea saiings over the last 24hrs resulting in some equipment trucks not arriving, Nicki Minaj has been forced to cancel her concert tonight.”

Unfortunately for Nicki, those who had already lined up for the concert were not entirely forgiving. Despite having lined up to see Nicki Minaj, a small contingent took to chanting Cardi B in retaliation. Though given the fact that they spent money to catch Nicki live, the spontaneous change of alliance might be worthy of a full-bellied Khaled-ism: “congratulations, you played yourself.”

As of now, Nicki Minaj has yet to comment on the cancellation. 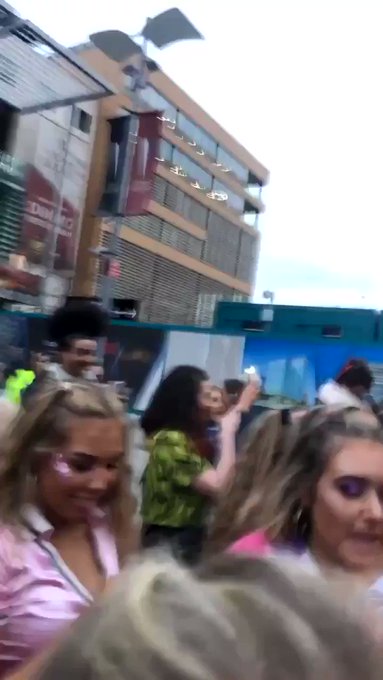 After the cancellation of the #NickiWRLDTour show in Dublin, upset Nicki Minaj fans chanted Cardi B’s name as a retaliation.

2,386 people are talking about this
BE THE 1ST TO SHARE THIS POST WITH YOUR FRIENDS ON SOCIAL MEDIA USE THE SOCIAL MEDIA ICON ABOVE OR BELOW THANKS.

“Alaafin Of Oyo Is Not Just My Lover But Also My History Teacher” Favorite wife, Queen Anu spills