Over 63% of NBA players polled believe KD is headed to NY.

Two-time NBA Finals MVP Kevin Durant is set to become a free agent this Summer – something you’ve surely already heard – and there’s a growing sense of belief that this will be his last season with the Golden State Warriors.

And as Durant’s departure looms, more and more reports suggest that his next destination will be New York, as a member of the New York Knicks. The latest inkling of information regarding KD’s future plans comes from his peers.

Huge thanks to our 30 @TheAthleticNBA beat writers for hustling to gather this incredible insight: 127 players – more than a quarter of the league – on MVP, defense, overrated/underrated players, best/worst coaches, refs, and more, in our anonymous poll https://theathletic.com/909752/2019/04/08/the-2019-nba-player-poll-mvp-the-goat-most-overrated-players-weigh-in-on-the-best-and-worst-in-the-game/ …

Our NBA beat writers polled 127 players, on questions ranging from who is this year’s MVP to worst ref to the biggest trash talker.

72 people are talking about this

The Athletic recently polled a quarter of the NBA’s active roster on a number of topics, including who should be crowned NBA MVP, overrated/underrated players, and where Durant will be playing in the 2019-20 season.

According to The Athletic, more than 63% of the 127 players polled believe Durant will indeed be signing with the Knicks.

The Athletic polled 109 players to find out where they think Kevin Durant will be playing next season.

During his appearance on “The Herd with Colin Cowherd,” Bucher relayed the following:

“It’s not a matter of not liking or appreciating what he has,” Bucher said. “But being there, I can tell you that Kevin Durant has never been fully embraced by the Warriors faithful. And has never, from even a national perspective, been given the just do that you would expect for a guy who has been the NBA Finals MVP of their last two championships. It’s still Steph’s team. It’s still Steph, Klay, Draymond. KD thanks for coming along and helping us win these last two. He’s never gotten the just deserts.” 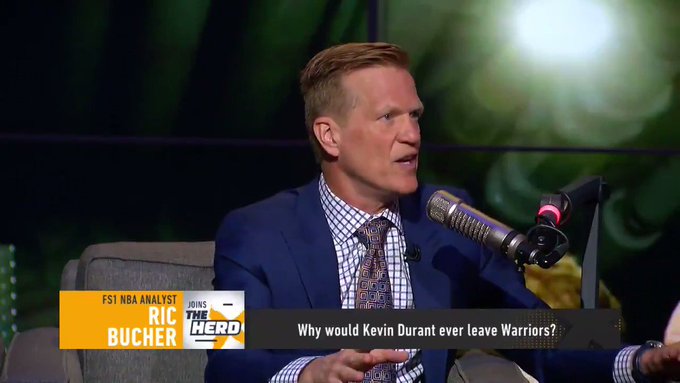 “From everything I’ve heard, it’s done. Yes, he’s leaving… If he so much as gets [the Knicks] into the Conference Finals, he will be beloved there like he never has been at Golden State after 2 Championships.”@RicBucher on Kevin Durant’s free agency

6ix9ine's Freedom Depends On Plea Deals Across The Board: Report

Captain Marvel Is Itching To Dance With Thanos In New "Avengers: Endgame" Clip