Mississippi still seems to be stuck in the past.

A federal judge ruled Friday that he is not going to immediately block the southern state’s Jim Crow–era two-step process for electing statewide officeholders, according to the Associated Press. The process, which no other state in the country has, was created to ensure that white people remained in power following the Reconstruction era.

Breaking news: A federal judge declined to step in and block a provision of the Mississippi constitution that allows the Mississippi House to choose the winner of statewide elections under certain circumstances. The provision was adopted in 1890 to preserve white power. 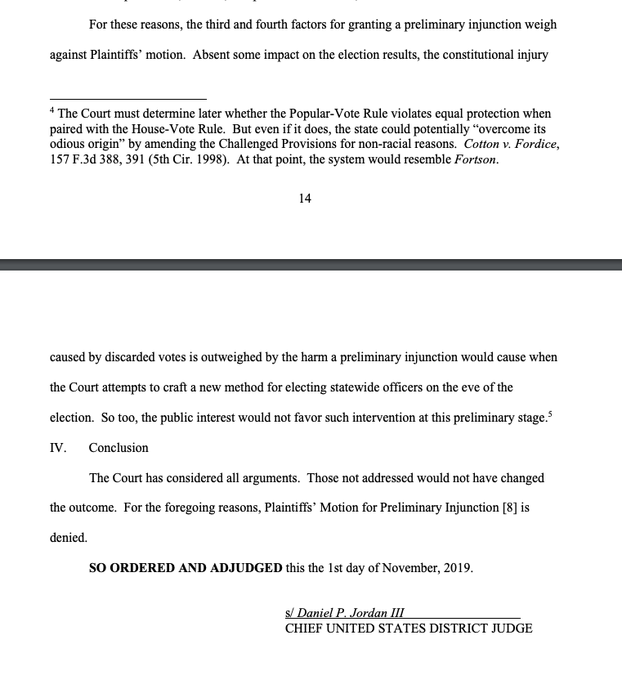 57 people are talking about this

U.S. District Judge Daniel P. Jordan III said he will not move forward with a preliminary injunction, which would have stopped the state from using the system in next week’s election. He’s open to looking into the case at a later date.

Jordan’s primary concern was the timing of the case, in which he says the state’s election laws “are not merely statutes that can be revised in one legislative session; they are constitutional provisions that require amendment.”

“That process cannot occur before the November 2019 votes are counted or within a short time after the election. Indeed, it was already too late when this suit was filed,” Jordan wrote, per the AP. “But based on Plaintiffs’ argument during the hearing, it appears the process could be attempted before the next statewide election cycle. If not, then by that time there would presumably have been a trial on the merits, and the Court could craft its own ‘remedial plan’ if necessary.”

“Mississippi’s 1890 constitution requires a statewide candidate to win a majority of the popular vote and a majority of the 122 state House districts,” according to the AP. “If nobody wins both, the election is decided by the House, and representatives are not obligated to vote as their districts did.”

This means lawmakers can ultimately decide who will be in power after a tight race.

The last time a race was decided in this way was in 1999, during a hotly contested race for governor. The Mississippi House chose the Democratic candidate who had the most votes, though at the time Democrats controlled the House. It is now controlled by Republicans, so the outcome could be very different, considering today’s climate.