Thursday’s “Jersey Shore: Family Vacation” was a continuation of Mike “The Situation” Sorrentinoand Lauren Pesce’s wedding reception, and by the new hour, everyone was hammered.

By everyone, we mean namely Pauly D, Vinny Guadagnino and Vinny’s infamously loose-lipped uncle, Uncle Nino, who decided to corner Ronnie Ortiz-Magro’s baby mama, Jen Harley, about all the stories he had been hearing.

At one point during the evening, Jen found herself alone at the table with Uncle Nino, who had been pounding wine since the moment he got there. Deena Cortese and her husband, Chris, were close by.

Deena and Chris busted out laughing as footage of Ronnie bringing home that busty blonde from Miami flashed across the screen. Jen didn’t find it as comical. She simply rolled her eyes.

“But a little puzzled,” Nino continued, even though Jen was visibly annoyed. “My opinion — I’ve been watching TMZ. You’re beating, you’re beating up on him? On my boy? What’s that all about?”

“Fake news, my balls!” Nino fired back. “Stop beating on him! You keep f–king him up! He loves you! He f–king loves you!”

Leave it to Uncle Nino to stir the pot! Who knew he watches TMZ? 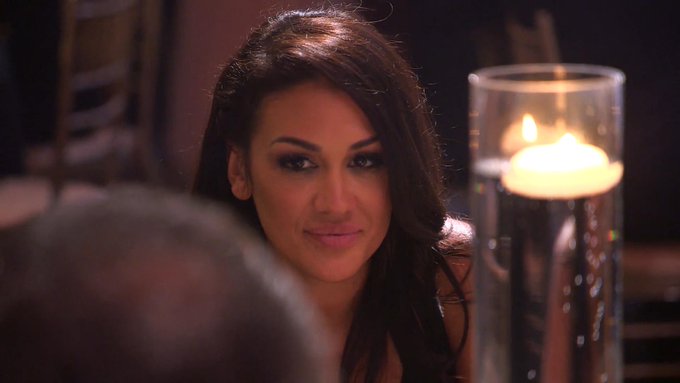 402 people are talking about this

“What are you talking about?” Jen asked, her voice getting louder.

“Why’d you beat up on him?” Nino persisted, to which Jen replied, “Ask him.”

Standing up, fixing her dress, Jen replied, “Away from you.”

But before everyone got wasted, the guys gave some of the best speeches in wedding-speech history. We’ve transcribed them below, in the order they were given.

But seriously, it is an honor to be here. I actually never thought I’d be involved in a special day of yours that didn’t involve Karma or Bamboo, but it is a pleasure and an honor to be here and be a part of this special day for the beginning of your life and long journey together. I’ve known you for 10 years. You’re my family, you’re my brother and you really are an inspiration to me and everybody here to show that there is positive in the world and that everybody can change for the better. And I love you every day more and more.

There comes a very special moment in life where everything just makes sense, the universe aligns and you realize that true love really does exist. And one day, that moment happened for Mike. He was just sitting there, he opened his eyes and there she was — the wedding cake. It’s really good. You guys should try it later.

This wedding is so Italian, even when Mike proposed, he got down on one knee, he pulled out the ring, he put it between his fingers and he said, “Lauren, will you marry me?” [said using a stereotypically Italian hand gesture]

All I want in life is somebody to look at me the way Mike looks at a food menu.

You guys should see the party favors! On the way out, everybody is getting a horse’s head!

I knew she was gonna say yes because a real Italian wife never folds under questioning.

Nah, but seriously, guys, I can’t think of a more amazing couple. Me and Mike have a favorite quote: “A smooth sea never made a skilled sailor.” And through love, perseverance and strength, you guys have weathered every storm possible. And as Mike would say, “Now, you are the storm,” and there’s nothing that can stop you guys.

There’s a couple things that I strongly believe in. One of them is that God puts people in our life for a reason, so I sit back and I think, “Why did he put you in my life?” You and I were the first to walk into that house, we share the same birthday, we both live by the same lifestyle — gym, tanning, laundry — it’s a way of life. We didn’t write that shit, we just did it, you know what I mean?

You’re such a caring and giving man, Mike. You would give the shirt off your back for a friend in need, and it’s about time somebody gave back to you. And I believe God gave back to you. He gave you Laurens. You found your perfect match. A woman that completes you.

Lauren, you stuck by him through his good times, his bad times, his hard times, his fun times. You’re his soulmate. And when I met you, Lauren, for the first time, I knew right away that you were the one for Mike. I saw exactly what he saw in you instantly — that pure heart. It’s very hard to find. Believe me, I’m looking! I can’t find it. Trust me. There’s not many out there. I’m single!

After the speeches, the guests all danced their you-know-whats off, while Pauly and Vinny destroyed the bar. By the time it was time for the guys to perform, they were absolutely trashed, and we enjoyed every single minute of it.

Oh, and everyone loved Prank War Champion Pauly’s surprise guest, Rob Base, who crashed the reception to sing his 1988 smash, “It Takes Two,” while RSVP did a horrendous job performing their choreographed dance.

FUHGEDDABOUTIT! We’ve officially lost @DJPaulyD and @VINNYGUADAGNINO… Looks like Joey D and Louie are clocking in on tonight’s new #JSFamilyVacation! 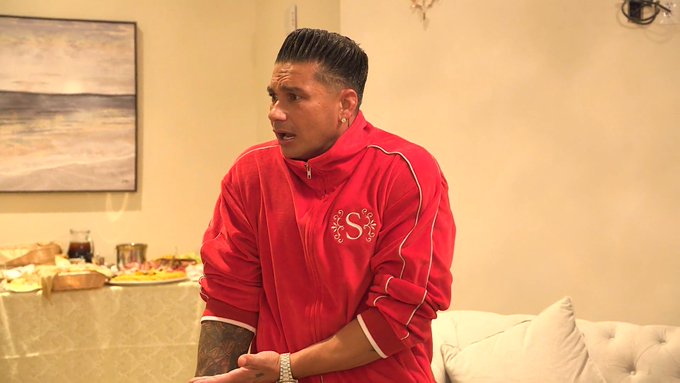 305 people are talking about this

At the end of the episode — when we were all puddles from crying because everything was so gorgeous — a few of the roommates said some memorable things.

After Angelina Pivarnick’s fiancé, Chris, asked a server if she could “stick her ass” in the chocolate fountain (he was denied), she told the camera that Mike and Lauren’s wedding was making her really excited for her own; however, her body language and facial expressions said something different.

“Me and Chris are in a really good place,” she said, shrugging her shoulders. “But yeah, we’ll see what happens in the future. Hopefully, you know, things will be okay. You know?”

During his confessional, Ronnie said, “Mike and Laurens look like the two happiest people in the world, and I realize that’s what I want — to be happy. It means I gotta change my patterns and start doing different things that are gonna be better for me internally, physically and mentally because shit’s not working.”

Jenni “JWoww” Farley, who’s done everything in her power to avoid talking about her divorce on camera, admitted, “I am definitely going through something right now, personal. All that drama — it’s just hard! It is, but I have my roommates, and I’m so thankful for them.”

And Mike opened up about his new reality: Now that the fun and games are over, he’s got time to serve.

“In a couple months, I have to do my time and pay my debt to society,” he said. “My days is numbered right now. Some people focus on the negative, but Big Daddy Sitch focuses on the positivity. There’s something special about everyone under one roof celebrating my big day today. It’s like a fairy tale, it really is.”

Democratic senator: Zelensky has no plans to meet with Giuliani

Democratic senator: Zelensky has no plans to meet with Giuliani