A Florida man with a Harvard degree and excellent test taking skills appeared to have the perfect pedigree for his job as director of college entrance exam preparation at a private sports academy and preparatory school.

But federal authorities revealed Tuesday that Mark Riddell wielded his mastery of standardized tests to help prospective college students cheat on the SAT and ACT, earning more than $200,000 in a widespread college admissions bribery scheme that ran for nearly a decade.

Riddell, 36, was charged Tuesday with conspiracy to commit mail fraud and honest services mail fraud and conspiracy to commit money laundering following a lengthy investigation that led to charges against 50 people — including actresses Lori Loughlin and Felicity Huffman. Riddell is accused of working with William “Rick” Singer to help wealthy parents get their children into elite colleges between 2011 and 2018.

Mark Riddell was spended from his position at IMG Academy. He is accused of helping students on their SAT and ACT exams. (IMG Academy)

“He was just a really smart guy,” U.S. Attorney Andrew Lelling said about Riddell in a Tuesday news conference. “He didn’t have inside information about the answers, he was just smart enough to get a near perfect score on demand or to calibrate the score.”

The 36-year-old Florida native attended Harvard from 2000 to 2004, the same period of time when Facebook founder Mark Zuckerberg was attending the prestigious university. Riddell became a professional tennis player for a short period before starting his position at IMG Academy in 2006, where he was an alumnus and worked until Tuesday.

Riddell was IMG Academy’s director of college entrance exam preparation, according to his since-deleted biography page on the school’s website. Along with recruiting SAT and ACT tutors, the school previously praised Riddell helping to assist “thousands of students in gaining admission to top American universities such as Stanford, Duke, Columbia, Dartmouth” and other elite colleges.

During his time off, however, Riddell was filling out SAT and ACT bubble sheets for other prospective students in exchange for $10,000 for each person he helped, court documents unsealed Tuesday stated. Riddell worked as a key player to the two-part scam run by Singer, who described Riddell as the “best test-taker” who could “nail a score. He’s that good.” 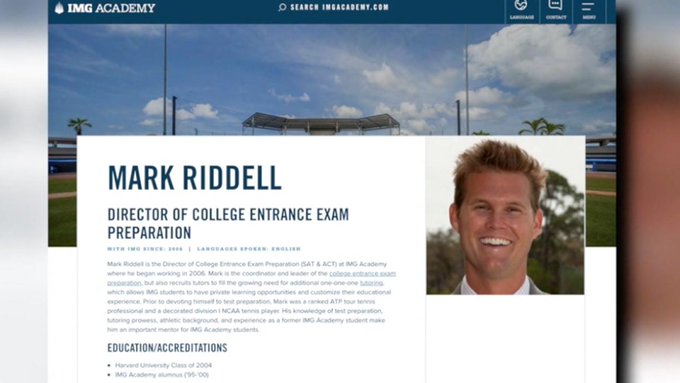 “Singer agreed with parents whose children were scheduled to take the SAT or ACT exam as part of the college admissions process to secretly have Riddell either take the test in place of their children or to correct their children’s answers after the children had completed the test,” records showed.

Singer had parents take their children to therapists to obtain documents stating the teens suffered from learning disabilities and needed extra time to take the standardized tests, Lelling said.

Riddell would then allegedly bribe test administrators and sit in with the students during the exam to either help them or correct answers so they achieved a high score, but “not too impressive” to raise suspicions, prosecutors said.

In a June 2018 incident, Riddell agreed to fly to Houston, Texas, and sit in with a client’s son while he took the ACT exam, documents stated. He was then expected to correct the student’s answers to ensure the student “would receive a high score.”

The student ended up getting sick and couldn’t travel to Houston as planned. So Singer, instead, sent a copy of his client’s son handwriting to Riddell, who then took the ACT for the student in his hotel room. Riddell called Singer after the exam and predicted his client’s son would scare a 35 out of 36 on the exam.

IMG Academy announced Tuesday that Riddell has been suspended from his position.

“Today [Tuesday] we were made aware of the charges against Mark Riddell. Riddell has been suspended indefinitely as we investigate this matter,” the school said in a statement.

Singer pleaded guilty Tuesday and acknowledged he ran his company and charity, Key Worldwide Foundation, to bribe parents willing to pay up to $6.5 million to get their children into colleges.

The Associated Press contributed to this report.