The Browns have failed to meet the gaudy expectations that preceded the team heading into the season and emotions are boiling over. Just look at Baker Mayfield, who made a premature exit from his weekly press conference on Wednesday.

Cleveland sports reporter Tony Grossi started a line of questioning about a failed Browns drive during Cleveland’s loss to the Patriots on Sunday. When Baker tried to shift the focus to the costly penalties the team received during the offensive possession, Grossi interrupted his response, and Baker was not pleased.

Baker Mayfield got into a heated moment with a reporter and walked out of his weekly press conference. #Browns 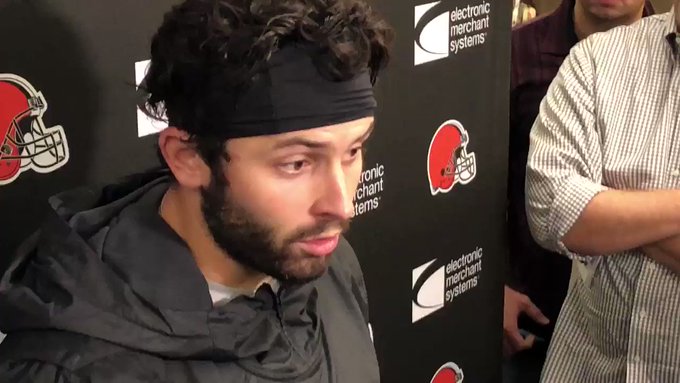 2,126 people are talking about this

“Stop saying but,” Baker said to Grossi. “I just told you the clock was running and we had a penalty. You want to give them the ball back? No. You don’t play, you don’t know. That’s just plain and simple.” Grossi then asked if Mayfield was happy about the failed drive. “Was I happy with the drive? No, we didn’t score points. That’s the dumbest question you could ask. What? Jesus, Tony.” Mayfield then walked away from the reporters, ending the media session.

Some NFL fans used the interaction as an opportunity to bash Baker for not keeping his composure.

Baker Mayfield would get eaten alive by the NY media

383 people are talking about this

Others put the blame squarely on Grossi for asking Mayfield a question that seemed to be self-explanatory.

Two reasons I am fine with this:

Everybody wants to hear the truth until they actually get it…. I am who I am and always have been. Don’t call it emotional when it’s convenient and then passion when it fits. I care about winning, so yeah I’m frustrated. If I was to act like it’s okay to lose, then y’all would

123 people are talking about this

I see this as less about Baker as a person and more his relationship with the reporter.
There are some local reporters that just know how to press buttons on a consistent basis lol. When it’s their turn you anticipate them asking an annoying question

121 people are talking about this

Baker just did to Grossi what Grossi has done to many of you great people on here when he gets a question or comment he doesn’t like.
Oh, the irony.

55 people are talking about this

122 people are talking about this

As for Baker, he took to Twitter where he explained that his reaction came from his competitive nature. The Browns are currently third in the AFC North with a record of 2-5. The team needs to tap into its offensive potential in a hurry if they want to put themselves in the playoff hunt and keep the season alive. Mayfield understands this, and tweeted that his “sense of urgency” is at an all-time high.

Everybody wants to hear the truth until they actually get it…. I am who I am and always have been. Don’t call it emotional when it’s convenient and then passion when it fits. I care about winning, so yeah I’m frustrated. If I was to act like it’s okay to lose, then y’all would

say that I’ve gotten complacent. My sense of urgency is at an all time high. And if I offend anybody along the way… that’s too bad

4,571 people are talking about this

The Clippers-Lakers Rivalry Is Finally a Rivalry