6ix9ine continued to troll Lil Reese following the shooting in Chicago, Saturday, during which the rapper was grazed in the eye by a bullet. Immediately after the incident, 6ix9ine posted “Lil Tim out here wildin,” and “How he got shot before Quando.”

In the time since, 6ix9ine has only gone further, launching a GoFundME to “help Reese buy a car.”

The rapper posted a screenshot of the page on his Instagram which showed the title “HELP REESE BUY A CAR” with a goal of $2,000.

28-year-old Reese was taken to a nearby hospital in “fair condition.” He said “God is great” later that night in a since-deleted Instagram story post. Two other individuals, ages 20 and 27, were involved in the shooting as well.

The Chicago Tribune reports that “Lil Reese told police that he met the people in the Durango outside of the garage and directed them where to drive so he could buy cannabis from them, the report said. The other people shot gave police little information.”

6ix9ine also posted a story writing “Pray for him. He stole the wrong person car today!”

In another, he wrote “THE 6IX9INE CURSE IS REAL. REST IN PEACE TO ALL THE RAPPERS WHO ARE IN HEAVEN.”

The trolling never ends when it involves Tekashi 6ix9ine. lol Prayers to Lil Reese for real though. #First #BOHH #BlackOwnedHipHop 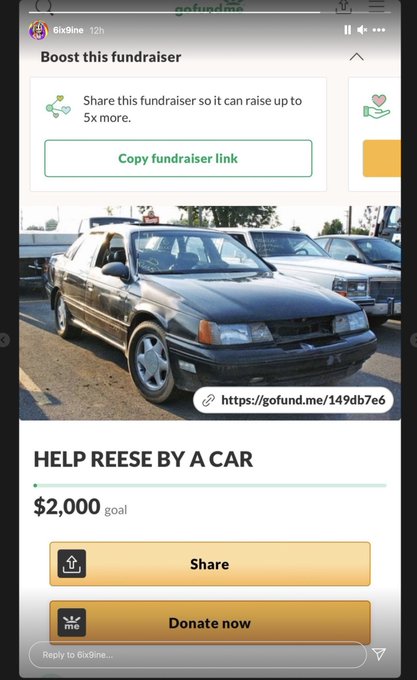 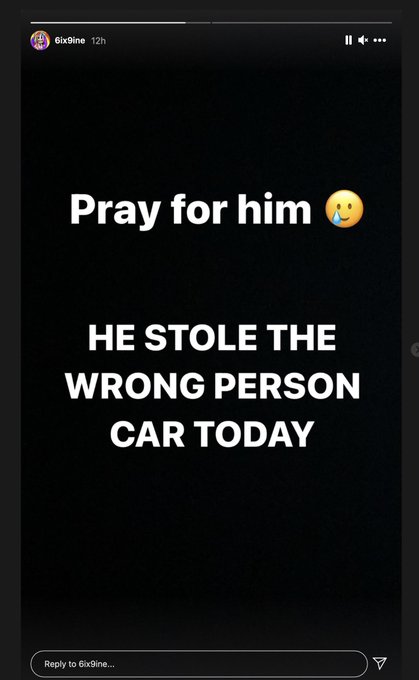